There are two main islands – Inishkea North and Inishkea South (Goose Islands, Irish: Inis Gé) situated off the coast of the Mullet peninsula. The islands lie between Inishglora to their north and Duvillaun to their south, off the Mullet’s west coast, and offer some protection to the mainland coast from the power of the eastern Atlantic Ocean.

The Inishkea Whaling station, which is still evident, was set up in 1907 by the Norwegians at Rusheen, a small tidal island to the east of Inishkea South under the management of Captain Bruun. After capture the whale was dragged up a slipway where it was flensed or cut up into pieces, the oil was extracted and the bones were ground into meal. These by-products were subsequently exported to Scotland. Captain Bruun left the station here in 1910 and established another station on Blacksod Bay to the south of Ardelly Point. The Rusheen station encountered many difficulties including its remote location, tidal problems and poor management, which culminated in its closure in 1913. However, the islands were still home to a thriving fishing community.

But then disaster struck on 28th October 1927. The men from the islands were fishing in the clear waters when a sudden violent storm blew up and caught them unawares. Some of the currachs managed to return home, but 10 men were lost at sea on that fateful night – only two survived. They were subsequently buried at Fál Mór & Glosh (on the mainland, overlooking the islands). The islanders were devastated, and a few years later in 1935 they all moved onto the mainland – the government helped to rehouse them in Glosh, a village on the peninsula, overlooking the islands. The last survivor of the Drownings – Pat ‘Rua’ Reilly – died aged 101 in 2008.

St. Colmcille founded a monastery on Inishkea North in the Early Christian period between the sixth and tenth century A.D. Three large mounds, known as the Baileys stand out to the east, the biggest of which is known as the ‘Bailey Mór’. This contains a mixture of shells, animal bones and sand. By far the most common shell present is the ‘purple purpura’ which the monks used to produce a purple ink, and this was used to illuminate the manuscripts. The ink was exported from here to other monastic sites. Cross slabs were discovered on top of this mound one of which depicted a stylized crucifixion scene. Among the other archaeological remains on the island are St. Colmcille’s church, a holy well, beehive huts and a variety of cross-slabs.

Inishkea South also contains a wealth of archaeological material dating to the Early Christian Period including cross-slabs and a holy well.

Both of the islands contain shell middens, which are mounds containing a mixture of burnt shells and charcoal layers. These are antiquated refuse heaps which are difficult to date accurately as they were used over an extended period of time, stretching from the Neolithic (c. 5000 B.C.) to the nineteenth century.

The Inishkea islands are now home to many endangered species, seabirds, grey seals, flora and fauna. The islands are internationally important with respect to birdlife. Half of the Irish wintering population of Barnacle geese make the Inishkeas their home. 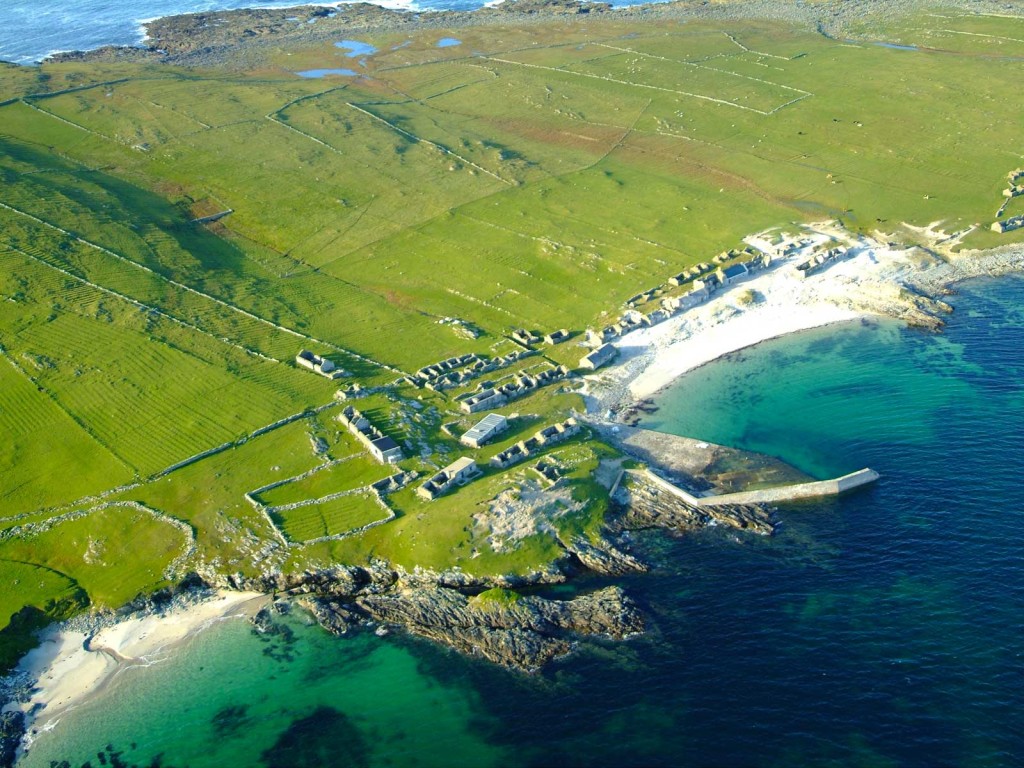